Yes, there are actually shoes used for wrestling. Shoes especially designed for wresting itself. Yes, it may sound a bit odd for many, that wrestlers need shoes of their own, but there are tons of reasons wrestlers actually wear shoes—specially-made shoes, at that.

So, what exactly are wrestling shoes? Why do they help wrestlers in the sport they so totally love?

Let’s consider you just got into the wrestling sport. How do you think you’re going to go about what the best one is for you? Where exactly should you look? What should you look for in a wrestling shoe, considering you’re still a plain-old neophyte in the sport?

Here, I’ve got some reviews of shoes you can pick from, based on your needs. While it’s a bit rash to say these are the best wrestling shoes on the market, I’m going to push for it anyway. All you need to do now is to just pick carefully, and you’d be on your way. 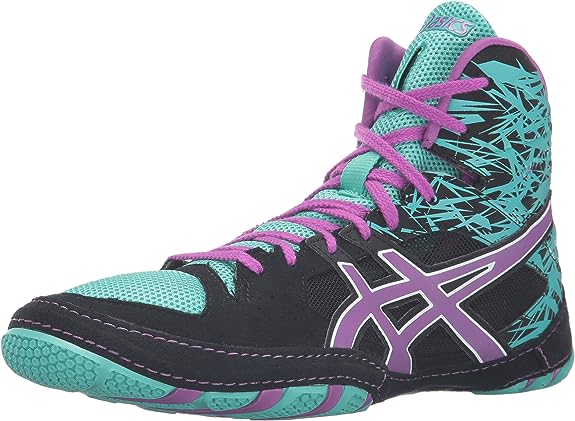 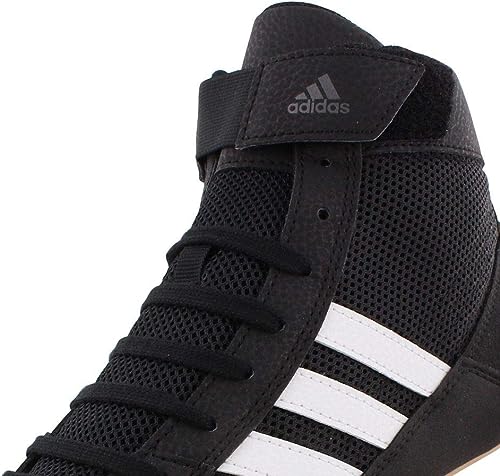 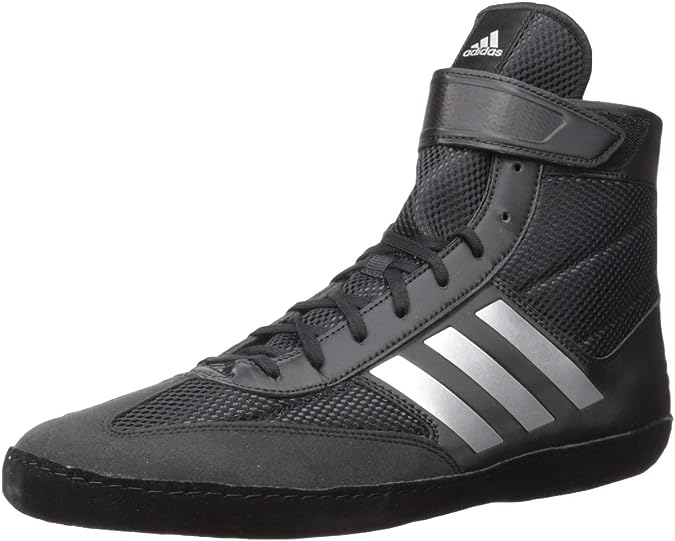 ASICS has always been known to create top-notch athletic shoes, and they’ve also wrestling shoes available. A pair of Cael shoes could be your top choice, based on the brand name alone. Its synthetic leather build helps in providing more flexibility, considering the nature of wrestling shoes.

In terms of traction, the rubber sole does indeed help a lot, so that won’t be much of a problem. They stick pretty well, allowing wrestlers to of course stay on the ground for the duration of the match.

Users have noted that the shoes have lasted for about a decade, attesting to their own durability, while also providing wrestlers the much-needed comfort in the ring. Of course, wrestlers would rather focus on their technique than any minor discomfort stemming from their apparel.

Pros:
Cons:
Buy Now
We earn a commission if you make a purchase, at no additional cost to you.
Best Value

Adidas, being a big-name brand, naturally wouldn’t pass on the opportunity to have their own line of wrestling shoes. The HVC2, strangely called a “speed shoe,” is just one of them, and it’s great for beginners; the shoe is popular among high school students, so you can tell that a pair of HVC2s are great for those starting out.

The shoes feature a mid-cut orientation and are a little bit higher, they could almost pass as boots. Users have noted that the fit is more or less excellent, and they’ve never had any problems with such, even when ordering online. Not only are these shoes used for wrestling, but for boxing as well.

The shoes are also pretty durable, which again is important in a contact sport such as wrestling, but nonetheless flexible enough for wrestlers to focus on their technique in the ring. This pair is a welcome addition to any wrestler’s arsenal.

Pros:
Cons:
Buy Now
We earn a commission if you make a purchase, at no additional cost to you.
Top Pick

Again, as a well-established sports brand, Adidas dishes out another wrestling shoe in form of the Combat Speed 5. Adidas appears to be obsessed with agility in this case, but that nonetheless doesn’t make this shoe a bad pick. There are tons of reasons you should look into the Combat Speed 5.

Handy For Your Sweaty Feet

Its mesh lining provides wrestlers breathability, even in more humid environments. This is handy for those with sweaty feet, so if you’re suffering from that problem, then a pair of Combat Speed 5s is a great pick.

What are people saying about these shoes? For starters, they have noted that they look pretty good! They could pass as street shoes, actually, and if I were into wrestling, I would get a pair of these myself, since they’re rather versatile. Fit is one size up, so that’s an important consideration when buying a pair of these.

Can Be Used When Weightlifting

The Combat Speed 5 is also good for weightlifting, especially for doing compound exercises such as squats and deadlifts. If you’re also looking for shoes to be used for your hypertrophy routine, then these shoes by Adidas should be on your list 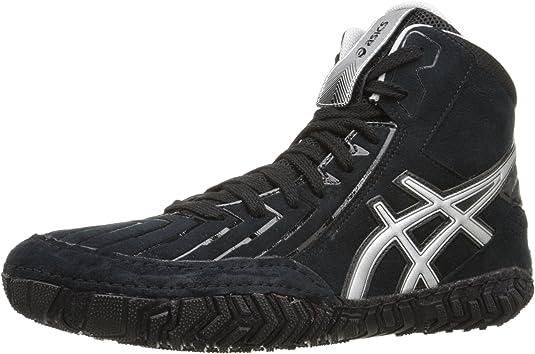 Provides Comfort With Every Move

ASICS has been establishing itself well in the wrestling league, that they’ve got another pair for wrestlers wanting to possess great-quality shoes in the ring. As the name implies, the Aggressor 3 is a real draw, allowing for more aggressive movements while providing much-needed comfort and flexibility.

As with most ASICS shoes, the material is made of synthetic leather, allowing for experimentation on comfort and flexibility in the ring. It’s got great traction and ankle support, reducing the risk of injury in the sport.

They’re a little smaller than street shoes, so it’s best to actually know your shoe measurement before jumping in to make a purchase. Although it’s ideally a little tighter, many users might feel some discomfort, especially if they’re just starting out with the sport.

For more advanced users, this pair could well be the best pick, considering its more aggressive orientation, regardless of individual wrestling styles. 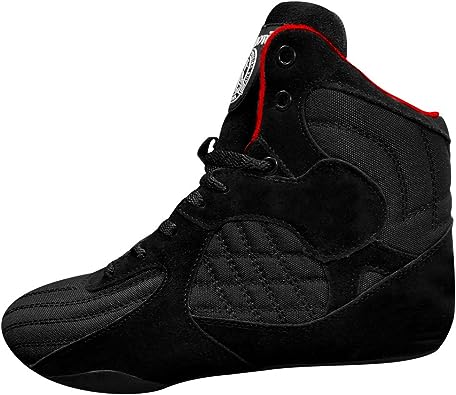 A manufacturer of premium gear for martial arts, bodybuilding, and weight lifting, Otomix delivers one of the highest quality wrestling shoes for men and women. This footwear is ultra-light and flat, yet still provides the needed stability and support in every motion.

Otomix’s shoes have different colors and designs to choose from so you can go out to train or battle in style. This brand is committed to delivering durable wrestling shoes to anyone – you can be an amateur or beginner, or an expert and still find comfort wearing these shoes.

It is recommended to pick about half above your regular size to ensure that the shoes fit well and comfortably.

What are the common characteristics of wrestling shoes?

Barefoot Sensation. Wrestling requires utmost flexibility, and moving about with shoes that don’t offer much in terms of such can be problematic. I’ve used a lot of shoes that I know wouldn’t make the cut whenever they’re used for competitive wrestling.

That’s why I believe wrestlers need better shoes, and the ideal shoes for wresters are those that provide the sort of barefoot sensation.

Wrestling moves can be complex, often incorporating grapples and throws from other martial arts. Flexibility, therefore, when it comes to executing complex moves is an important factor, and that’s why wrestling shoes are designed to feel like you’re not wearing any shoes at all.

This is an important component of any wrestling shoe, and wrestlers would attest that such would be essential in any given scenario.

Traction. Now, wrestling is also a sport that involves pushing, pulling, and shoving. Traction, therefore, is very important in wrestling shoes, because it allows wrestlers to stay on the ground, thereby resisting any sort of move that makes doing so hard for them.

In a sense, traction can help wrestlers bring the match to their advantage, especially when their opponent isn’t careful enough.

Every move in wrestling requires resistance for anyone in the ring to survive it, so sticking one’s feet on the mat brings about what’s important in wrestling, and that is to remain standing. It won’t take me much to know that It’s what’s fundamental to winning a match.

The traction of wrestling shoes can make or break any wrestling match, although it’s always the skill of the wrestler that’s a more important factor in it all.

Ankle Support. It’s really easy to trip over and fall in wrestling. Some of the more common injuries in the sport are sprains, often because wrestlers, and even most athletes for that matter, tend to bend their joints, especially their knees. This may either be accidental or not, but regardless, spraining can occur.

Why use wrestling shoes?

Ideally, any wrestler or fighter should be barefooted in the ring, but this comes with many problems. For one thing, they’re more prone to injury barefoot, often suffering from sprains and cuts, among other things.

Wrestling shoes, as with most sports shoes, give wrestlers an ample amount of support, traction, and protection in the ring, while keeping flexibility and the barefoot sensation intact.

How should wrestling shoes fit?

This is kind of a tricky one since wrestling shoes are a bit bigger or smaller than your street shoe size. In other words, you’ll need to pick out where you’re most comfortable. However, it’s also ideal that they’re a bit on the tighter side, although not too tight, that they cause discomfort.

In short, go for ones that fit a bit tighter, but you’re comfortable with.

Can wrestling shoes be used for something else?

Considering what’s important about wrestling shoes, it’s really no surprise how they can also be used for other sports. Let’s say, weightlifting, which is a sport on its own. Many weightlifters find wrestling shoes to be satisfactory when providing them with traction and balance while allowing for ankle protection in case things get awry.

I think anyone who wants to work out at the gym, just lifting weights, would benefit well from using wrestling shoes. Personally, I use my old-fashioned sneakers, but I do get what lifters are looking for—that’s how they end up with wrestling shoes in the first place.

In short, not only are wrestling shoes great for wrestling itself, but athletes can also use them for other sports, such as in this case, weightlifting. (But I’m sure there are rules in competitions you need to follow, such as the standard apparel, among other things, so if you plan on using wrestling shoes for weightlifting, make sure you only do so for training.)

Can you use wrestling shoes for boxing and MMA?

For boxing and MMA, wearing wrestling shoes aren’t a good idea. Wrestlers know how to fall safely, compared to boxers, so they can easily adjust themselves to prevent any foot injuries. Boxers are inclined to keep standing no matter what, and falling could be catastrophic.

MMA fighters don’t even really use shoes in the ring, as they incorporate many different styles that require them to be more versatile. Major MMA organizations also prohibit the use of most footwear, so wrestling shoes are out of the question.

So, how do wrestling shoes play a role in any athlete’s life? Well, I think that depends on what an athlete’s goals are. Wrestling shoes, aside from wrestling, can be handy in weightlifting, among other things, but aren’t really good for other contact sports, regardless of the similar nature to wrestling.

Regardless, it’s good to know there are many other shoes for different sports, and athletes have tons of choices. Wrestling is a great sport for many, so investing in good wrestling shoes is a must if they want to take their performance to the next level.